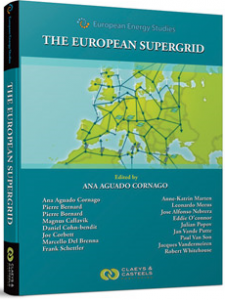 Friends of the Supergrid (FOSG), Europe’s largest industrial alliance for the development of a European interconnected Supergrid, is happy to announce the publication by Claeys & Casteels of the new book “The European Supergrid” edited by Ana Aguado, former CEO of FOSG. Thirty key experts of the energy sector contributed to the book; including Pierre Bernard, the Chairman of the Board and CEO of FOSG, Eddie O’Connor, FOSG’s founding President, Jose Alfonso Nebrera, Board Member of FOSG and Magnus Callavik, former Convenor of FOSG Working Group “Technology”.

Speaking in London at an international power conference, Pierre Bernard welcomed this publication which will greatly support the dissemination and knowledge of the concept of the European Supergrid and its many benefits, including on job creation and its contribution to the implementation of the European Internal Energy Market. The Supergrid, one of the key objectives of the Energy Union, needs now the appropriate policy actions to enable its technological deployment which will efficiently help securing Europe’s energy supply.

More information on the book can be found here.